We’ve picked out 10 London Underground stations which we feel stand out prominently from the rest. All tube stations are unique and each has its own wonders, but the 10 below, we have found to be rather interesting. Is your favourite tube station not one of the 10 below? Why not post it in the comments and why you think it’s interesting!

TFL’s London Underground is the world’s oldest underground subway system. First established in 1863 was the Metropolitan lines, and the London Underground network, since then, has grown considerably. The London Underground features 11 lines, along with the Docklands Light Railway, London Overground, Emerates Air Line, Tramlink and Crossrail collectively making up the modern version of Harry Beck’s tube map which makes traversal of the backbone of London as easy as it is today.

For an underground rail network that’s been operating for over 150 years, and growing rapidly, it’s only to be expected that number of stations have their quirks and although each station is different, these ones below, we find, stand out from the rest. 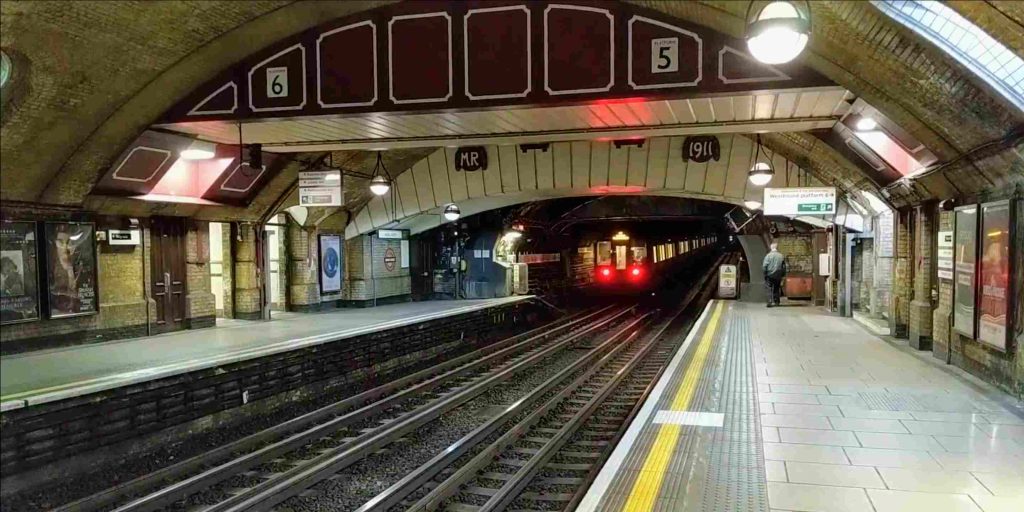 Baker Street was one of the first tube stations to open on the London Underground network, forming part of the Metropolitan Line, opened in 1863. Today, Baker Street has 10 platforms (indicated by the platform numbers on the ceiling in the above picture), serving 5 lines: Metropolitan, Jubilee, Bakerloo, Hammersmith & City, and Circle Lines. The fact that it was one of the first stations is shown by the MR plaque at the top of the far end of the platform, seen in the above photograph.

The fact that Baker Street Tube station has 10 platforms, this fact makes it the station with the most number of London Underground platforms anywhere on the network. 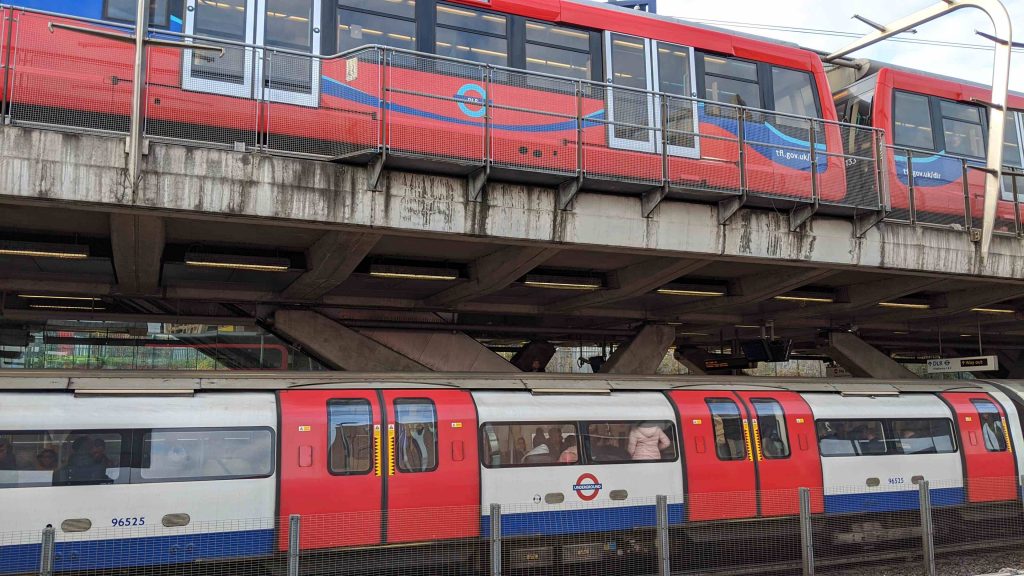 Canning Town tube station is combined London Underground and Docklands Light Railway interchange station. What makes Canning Town cool is that two platforms are situated directly on top of eachother, providing a unique opportunity to get photographs of the double decker platforms. Canning Town is served by Jubilee line trains from Stratford to Stanmore and also by DLR trains. 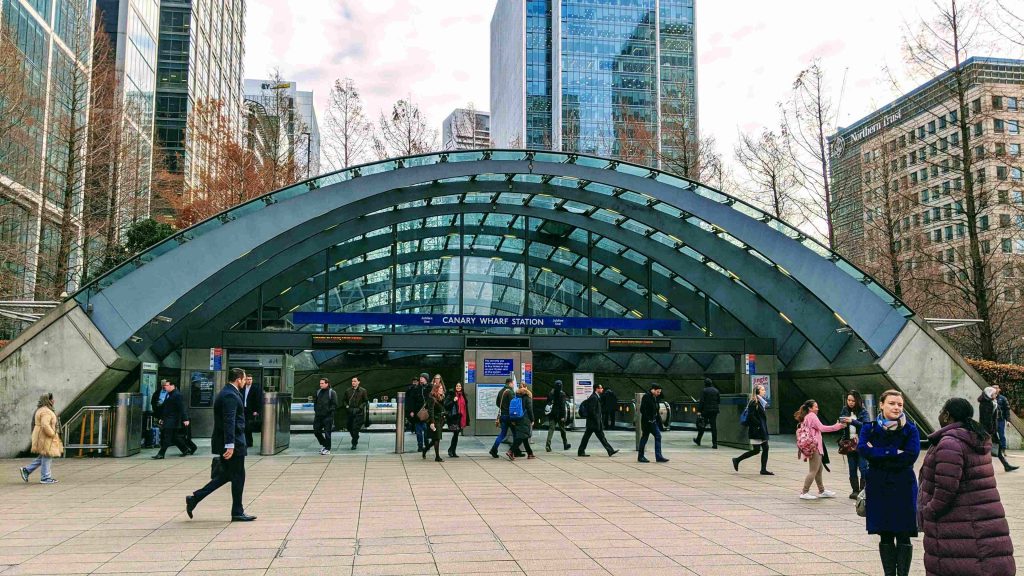 Located in Zone 2, and located two stops South of Canning Town by Jubilee line tube train, Canary Wharf is the busiest tube station to be served only by a single tube underground line. Serving the busy business district of east London, Canary Wharf is recognised for its station building architecture. The concourse features two curved glass canopies at the east and west ends of the station, which cover the entrances above and allow daylight into the ticket hall below.

There were just over 50 million entries/exits from Canary Wharf tube/DLR station in 2017. The green vibrant Jubilee Park is situated directly above the ticket hall, in between the east and west entrances.

Located in the heart of London and in zone 1, Tottenham Court Road is served by Central Line and Northern Line trains.

Tottenham Court Road is widely recognised by its bright white tunnels and tiling throughout the station.

Clapham North is served by Northern Line trains to and from Morden, Edgware via Bank and Charing Cross branches.

The island platforms can feel intimidating due to the close proximity of the trains, especially when two are arriving same time it can feel like a safety hazard during busy times.

Angel makes our list of top 10 interesting tube stations because it has the longest escalator on the London Underground network. It also has the second longest escalator in the UK, with a length of 61 metres rising 27 metres high.

Located on the Hainault Loop between Redbridge and Newbury Park, situated in fare zone 4 of the central line.

Gants Hill tube station has no surface buildings and is accessed via passenger subway tunnels. The ticket office is situated directly beneath the roundabout on the road above.

Historically, the station’s tunnels were used as an air raid shelter during the second world war.

Roding Valley is also located on the Hainault Loop between Woodford and Chigwell. Riding Valley is one of 11  (correct as of 2019) tube stations that has no ticket barriers. To mitigate fare dodging, we won’t tell you what the other 10 are… 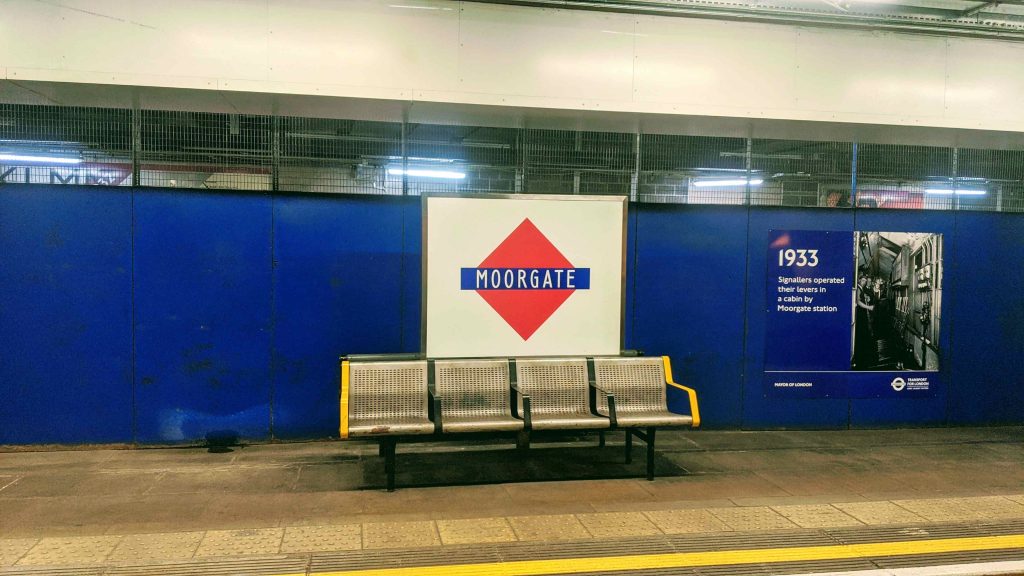 Parts of the Metropolitan Line roundels at Moorgate can be seen as squares. Back in the early days of the Metropolitan Railway, the owners of the “Met” chose to use diamond roundels as pictured above, whilst the rest of the tube used a different design, the now famous bar and circle roundel. The diamond roundels that can be seen in places at Moorgate tube station are for historical purposes. Only a small number of them at Moorgate have the diamond design, the majority are still the circle ones.

With over 320 stairs on its spiral staircase, the equivalent of a 15 storey building, Hampstead is the London Underground’s deepest tube station.

I hope you enjoyed reading this blog about the top 10 tube stations I have come across as interesting. Whilst every tube station is unique and has its own little things that put a smile on your face, if you feel you know some other tube stations that stand out why not put them in the comments below. The London Underground roundel is copyright TfL.