Christs Hospital station forms part of the Arun Valley line from Three Bridges to Arundel, running through Horsham and the Sussex countryside. The Arun Valley station remains open and is connected to the old disused platforms, which is part of the Downs Link trail.

The full route runs from Shoreham to Guildford (correct me if I’m wrong), however in my opinion the best part (in terms of what to see) is between West Grinstead and Christ’s Hospital.

In this short post I’ll share a few pictures that I took, on a bike ride from West Grinstead to Christ’s Hospital. 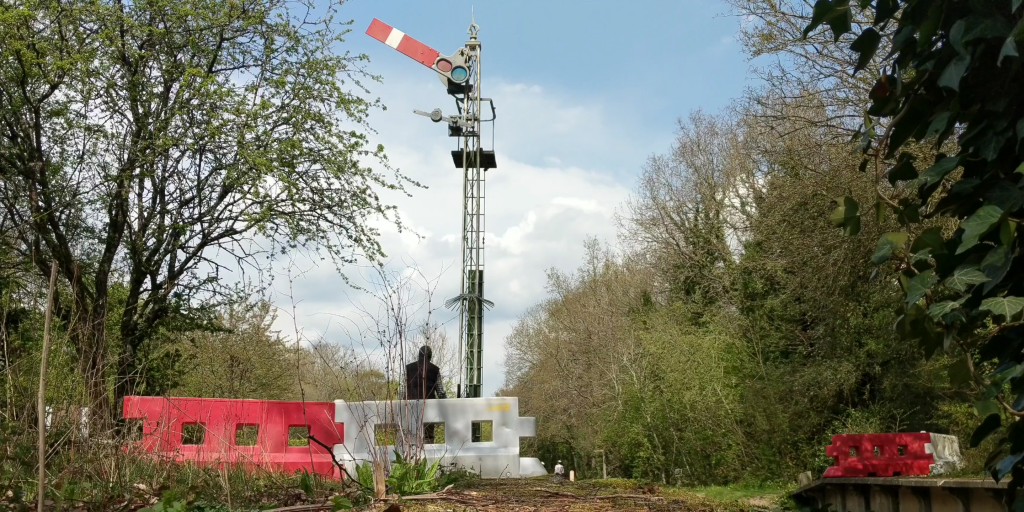 Starting off at West Grinstead, there is plenty of old railway history to see. Many components of the reconstruction are replicas, such as the tunnel. The platform’s still exist and are complimented by station sign and a signal which can be changed by hand. 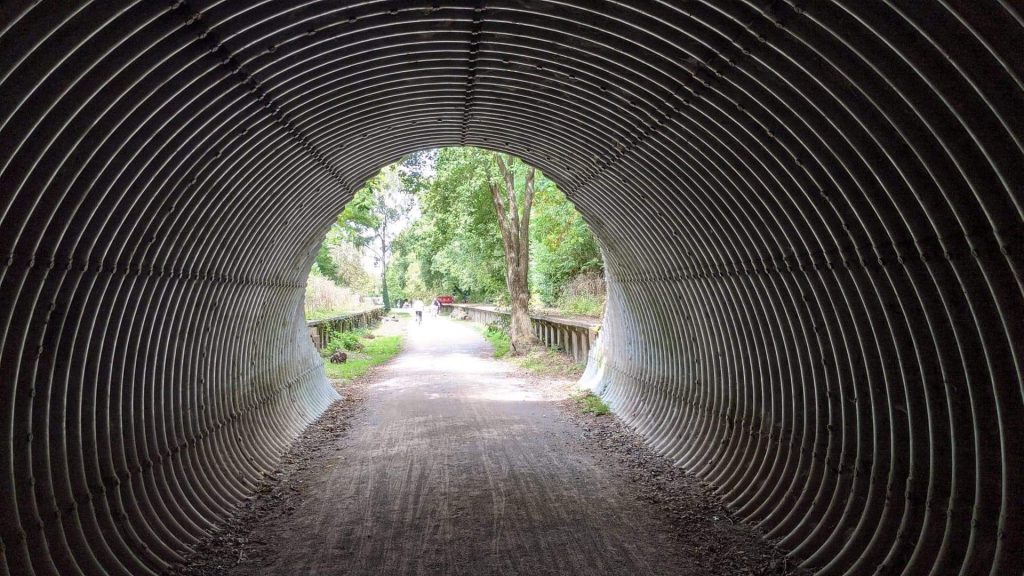 The tunnel is now made of metal and is clearly a reconstruction (no train would fit through that). It carries the main road over the top of it, and is one of the many bridges and tunnels along the route. 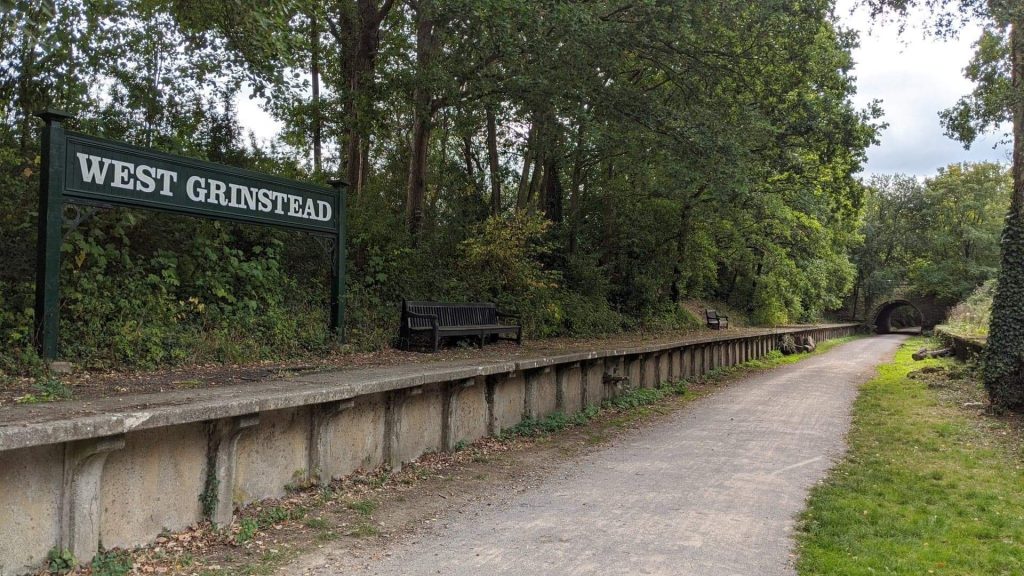 Above, a shot of the station sign and platforms looking south towards the tunnel. 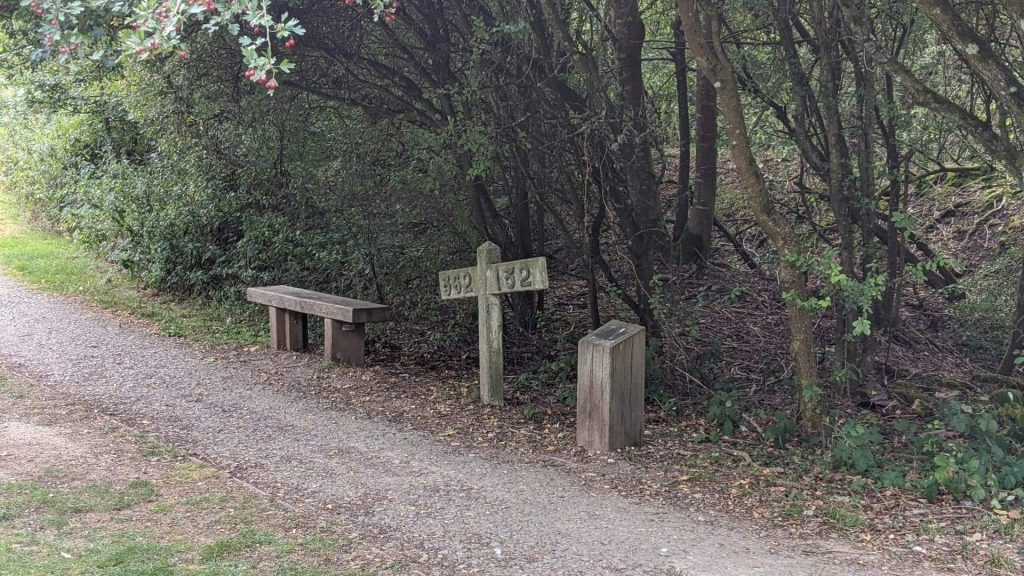 Also at West Grinstead, a rising/falling indicator which shows the gradient of the track. 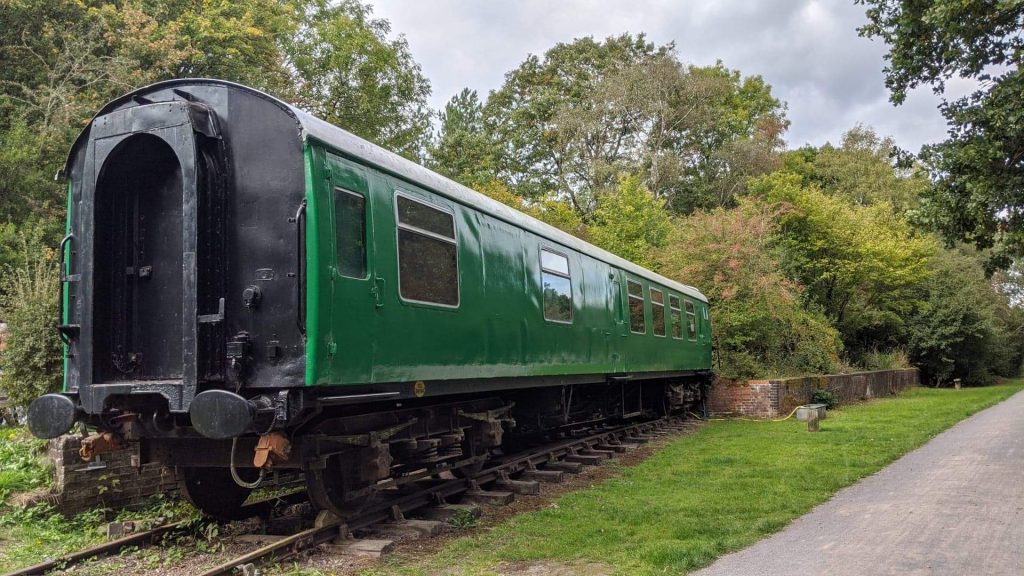 One of the best parts of the route is this beautiful mark 1 carriage. Not open to the public (at least during my visit), I understand this was brought from the Bluebell Railway (again I could be wrong).

That’s about all there is at West Grinstead, let’s take a look towards Southwater Station. On the way to Southwater, you’ll likely pass many other walkers and cyclists, passing over many bridges and past what clearly used to be things like foot crossings and line access steps (for workers etc). 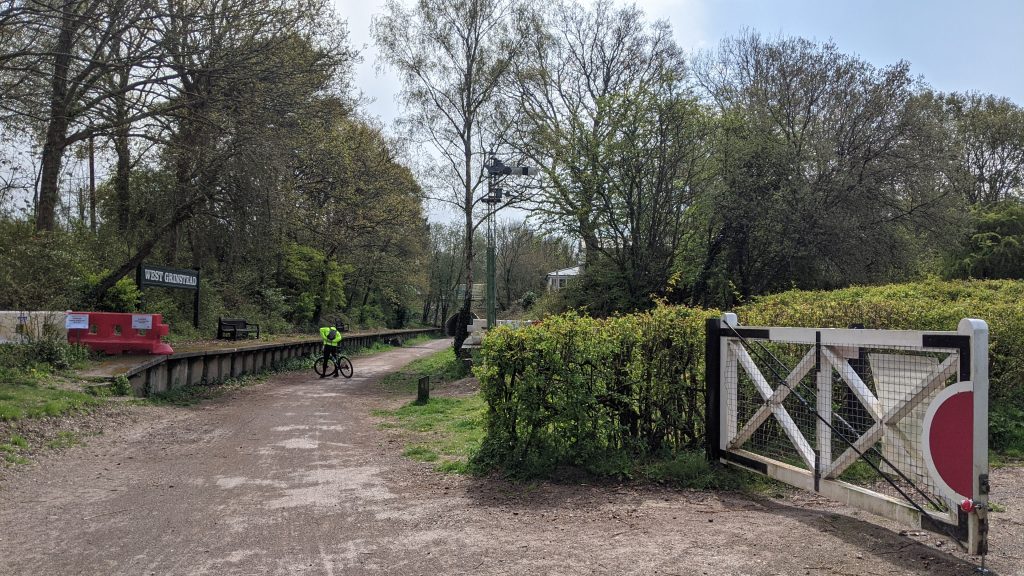 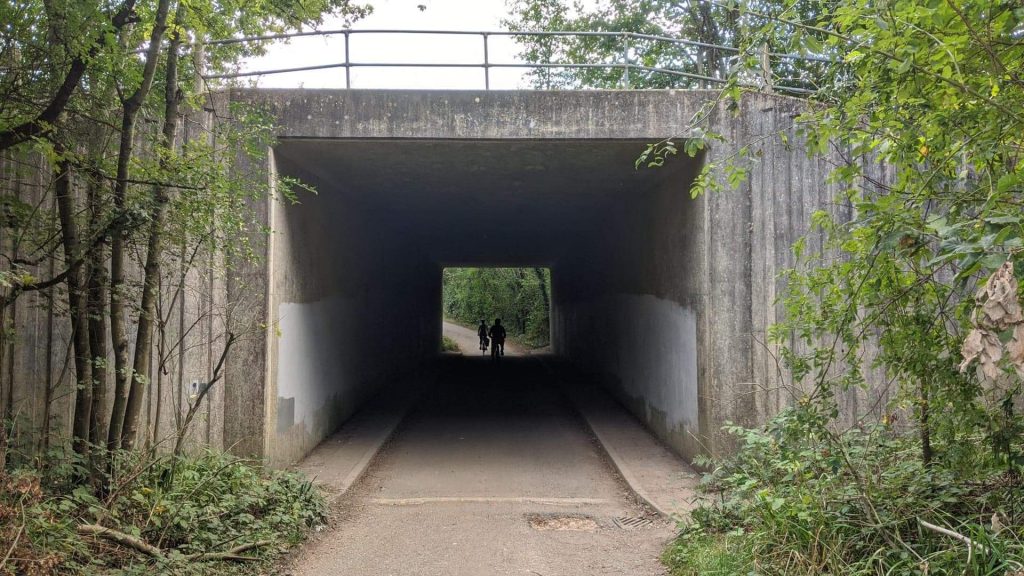 An old tunnel near Copsale, between Southwater and West Grinstead. This is the view looking south.

After a slightly uphill walk/ride, you eventually arrive into Southwater town. A conveniently placed Co-op offers a refreshing midway rest. 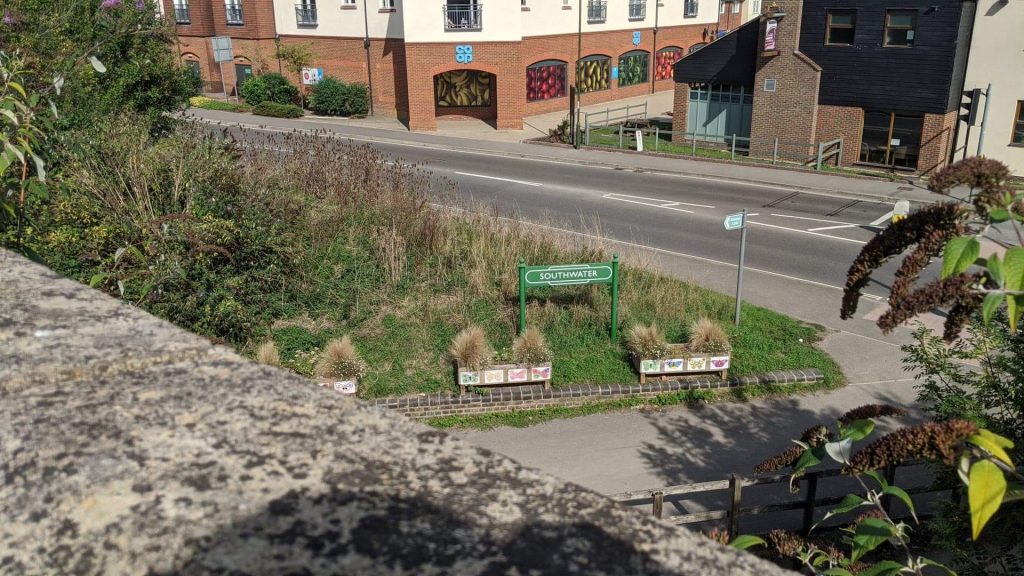 All that remains of Southwater is a grassy platform and station sign. It’s a nice piece of history given the lack of space, as it is right beside a busy junction and war memorial. The route to Christ’s Hospital is under the bridge that the above photo was taken on. From here, the route to Guildford is an 18 mile trip, certainly not one to be done on foot.

Progressing North (or West, whichever), the route remains straightforward, more urbanised than that between Southwater and West Grinstead. Passing a large playing field and housing, passing under another railway bridge on the approach to Christ’s Hospital. Eventually after an approx 45 minute cycle or 90 minute walk, you eventually walk almost parallel to the Arun Valley line, before coming to a busy road which is not far from the mainline station (directly ahead of where you were walking).

To access the old Downs Link station, you must either go via the subway on the mainline station, or go under the railway a bit further past the station.

The signage at Christ’s Hospital isn’t clear, and I actually ended up on a private estate overlooking the old station. 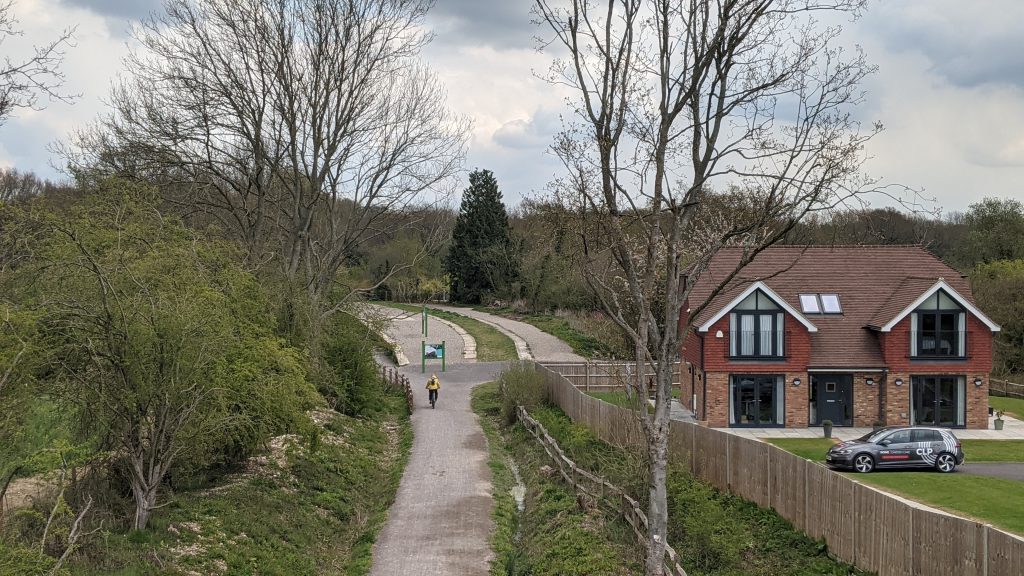 The above photo is looking towards Christ Hospital downs Link platform. The mainline station is beyond the trees, and both stations are connected. Below, the bridge I took the above from. Christs Hospital has an informational sign about the history of the station, and is complete with station sign similar to that at West Grinstead and Southwater. 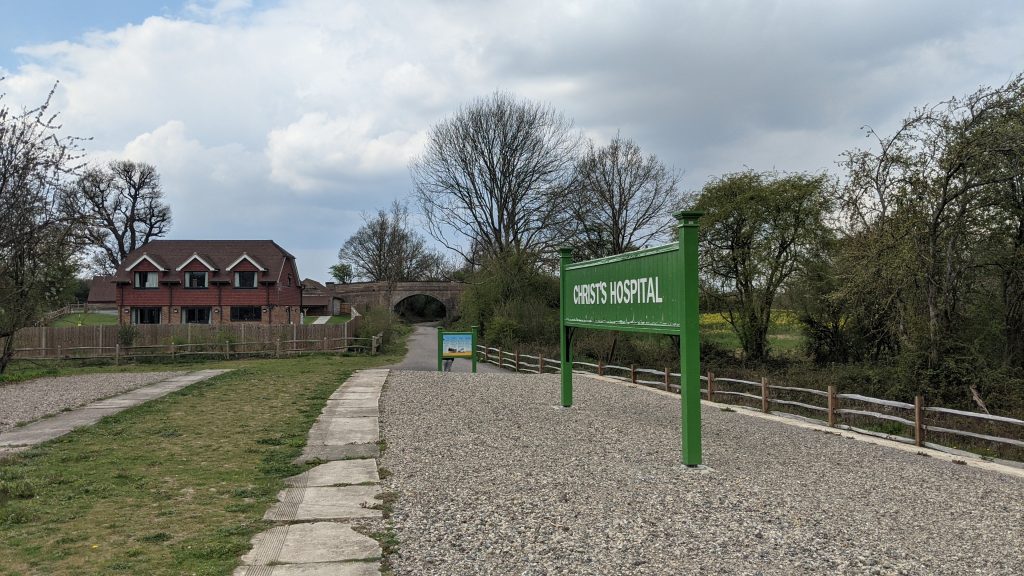 I hope that these images have shown just how interesting the Downs Link walking/cycle path is. If you have 4-5 hours to kill in the area, why not park at West Grinstead and go for a stroll. Overall you need about 2 hours each way really. It’s reasonably well signposted throughout the route – at least until Christ’s Hospital. I wasn’t sure where the route actually went after I got to Christ’s Hospital mainline station (unaware it actually connected to the old station). I went back on myself, crossing the railway line on the road bridge west of the station, finding myself on a private estate/farm overlooking the station, but no access to it.

I’m not sure how the trip to Guildford compares with the easy to follow, nicely laid paths of that I cycled on, but the 20 odd mile trip is somewhat off-putting and worth saving for another time.

Definitely an interesting piece of history.