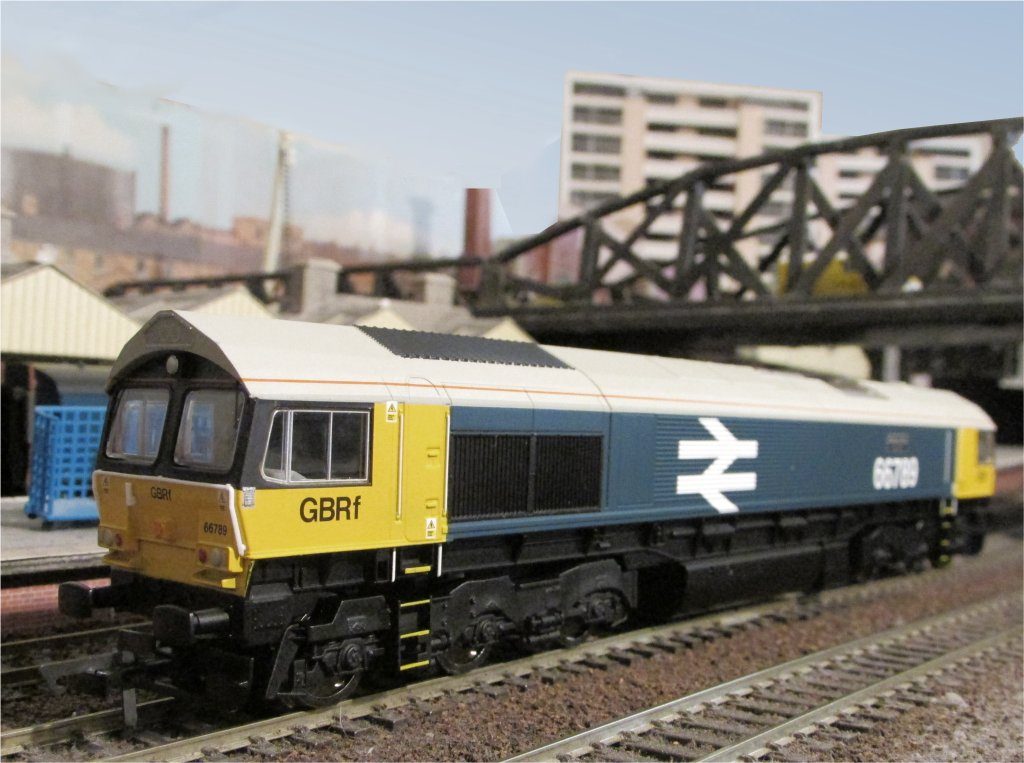 This is R3748 representing the GBRF engine No. 66789 in BR large logo livery, one of the latest releases from Hornby, announced at the beginning of the year as part of their 2019 range. The class 66 from Hornby has been with us for many years having its routes well and truly in Lima days. Although the original model was basic it has stood the test of time So then a wise move by Hornby to offer these popular engines in a range of ultra modern one-off liveries.

What do you get for your money?

The model is presented in a sleeve style box in keeping with the premium range. This reveals a trey that contains a sturdy ice cube container, it’s self within a sleeve, this containing the engine and pack of detailing parts. A clear set of instructions is also included.

The model consists of a reasonably accurate if basic under frame with the cab access steps on the bogies picked out in yellow. The buffers are moulded as part of the all-plastic chassis. The one peace clip on body is fitted with separate grab rails in white. It is fitted with a modern DCC ready motor similar to those in the Railroad range giving a smooth run. Traction tyres give good adhesion on the single powered bogie. However this makes the model very light. None the less it was capable of pulling a six-coach passenger train with no problem on the flat negotiating point work and radius three curves with ease. Modern NEM pockets make a welcome addition allowing for differing coupling systems. 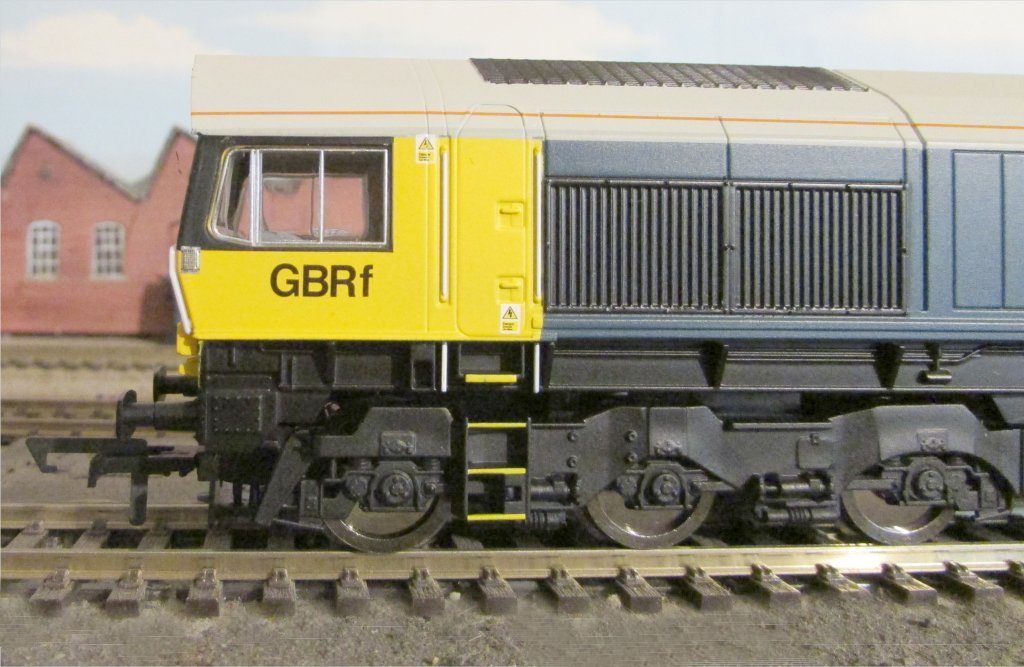 Given the corrugated nature of the body side decoration has been carried off to a reasonable standard featuring yellow cab end with GBRF branding, white roof, large numbers and BR insignia from ware the livery takes it’s name. A nameplate is also printed on the body side. The flush glazed windows are surrounded by simulated aluminium frames picked out in silver There is also a moulded lamp iron rendered in white as are the light clusters also moulded. Roof mounted equipment is picked out in black or silver ware appropriate.

This should be regarded as an entry-level offering appealing to the younger modeller or those on a tight budget. If you want a super detailed model with lighting, sprung metal buffers and etched grills this is probably not going to meet your needs. However if you want a reasonable representation of a class 66 at a price point that isn’t going to break the bank you could do far worse than adding this to your fleet. At around £68 and the option of adding Hornby’s TTS sound system you can obtain a generally good looking loco with sound for just over £100. A pleasant surprise was the set of detailing parts including and alternative snowplough, air pipes and metal Nameplates.

My reason for buying

Most people who know me will also know I am died in the wool BR corporate through and through, so the idea of a class 66 becoming a resident on the layout was something that was never going to happen!

The layout plays host to a growing number of enthusiasts in their mid 20s. These people have never experienced the BR era, seeing classic traction much as my generation would have seen steam engines either on enthusiast specials or in museums; so this excellent model seams to bridge the gap between nostalgia and modernity in a cheerful, affordable, shed load of fun!