A much over looked wagon yet one that played in important part in the life of heavy industry is the 20t Coke wagon, easily recognised by their high sides, fitted with wooden slats to allow the
carriage of the much lighter mineral. 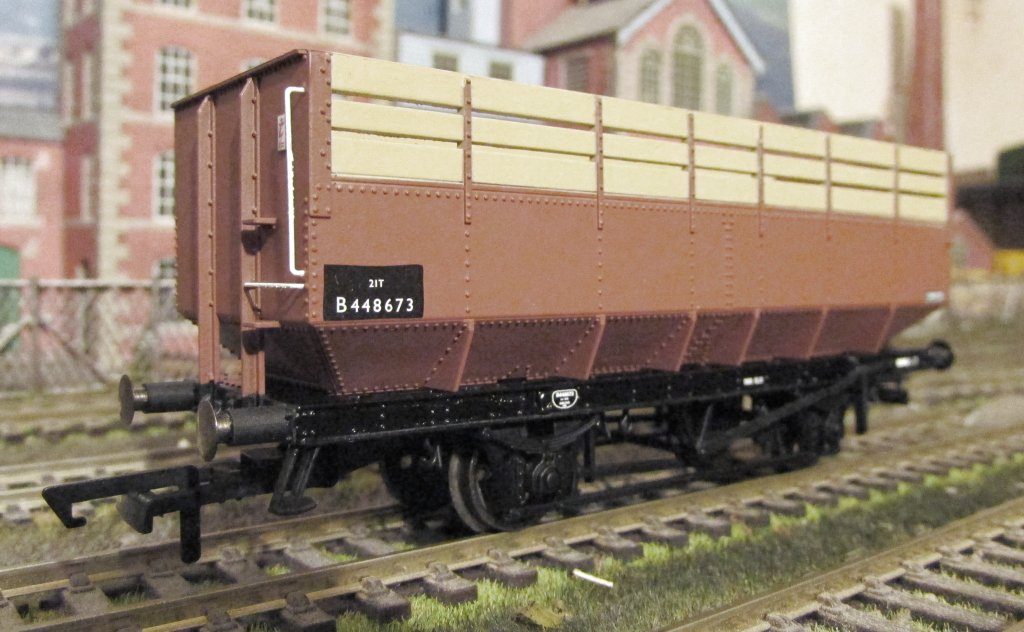 According to the title “Wagons of the early British Railways era” by David Larkin the wagons
were originally introduced for use by private owners. However, the LMS also ordered a batch to
diagram 1/150. The model on offer here represents the build to diagram 1/151 built at Shilden
works.

Under TOPS they are classified HCP indicating they are from the hopper group of wagons with
through pipe, but not fully fitted, hence the bauxite livery. These wagons are not TOPS marked.
However it took many years to complete the renumbering process and even then I suspect some
escaped. There are some examples of the TOPS code were simply applied by hand rather then
the more conventional stencil method. It would be quite easy to produce an alternative data
panel. This would also have the advantage of being able to make individual numbers!!
The only major difference between the two was that the later design had full metal ends whilst
1/150 had wooden slats at both ends. I am led to believe one of the more well known kit makers
produce this version.

Question for those in the know? Ware I have used the term slats for the wooden panels, I believe
they are also known as “raves” perhaps somebody could correct me.

From viewing the engineering samples to opening the box I was immediately impressed with the
attention to detail. The main body is well constructed without feeling chunky. The metal
uprights that are riveted to the wooden slats are delicately rendered as are the numerous rivets
without looking over sized There are also steps at the right end of the body on each side, also
separately grab rails are firmly attached. The inside of the hopper is again well detailed
including a bracing strut mid way along the top of the metal body. Ribs and supporting struts
are clearly moulded but again without looking toy like. Inside the bodywork there are yet more
rivets. The wooden slats that makes these wagons stand out from other general hoppers are
clearly defined

The under frame is offered in the same high standard of detail including miniature foot steps at
each end that seam quite sturdy to the touch. The running gear is subtle adding to the overall
great appearance of the model. A nice touch is the separately fitted handbrake that stands out
well with the end of the leavers picked out in white. I suspect a little care will be required as I can
see it easily being caught, and damaged. There are also tiny hooks, mounted on the chassis. The
buffers although not sprung are metal as are the standard three hole wheels. As a precaution I
checked these for gauging and found them all requiring easing out with my trusty brass gauge.
Time well spent, preventing frustration later.​

The couplings are of the familiar NEM type allowing the fitting of KDs. or other coupling
systems. However owing to the length of the wagon the NEM assembly is screw mounted to the
under frame with a flexible self-centring “tail”. For the more authentic three link coupling a
hook is also provided. 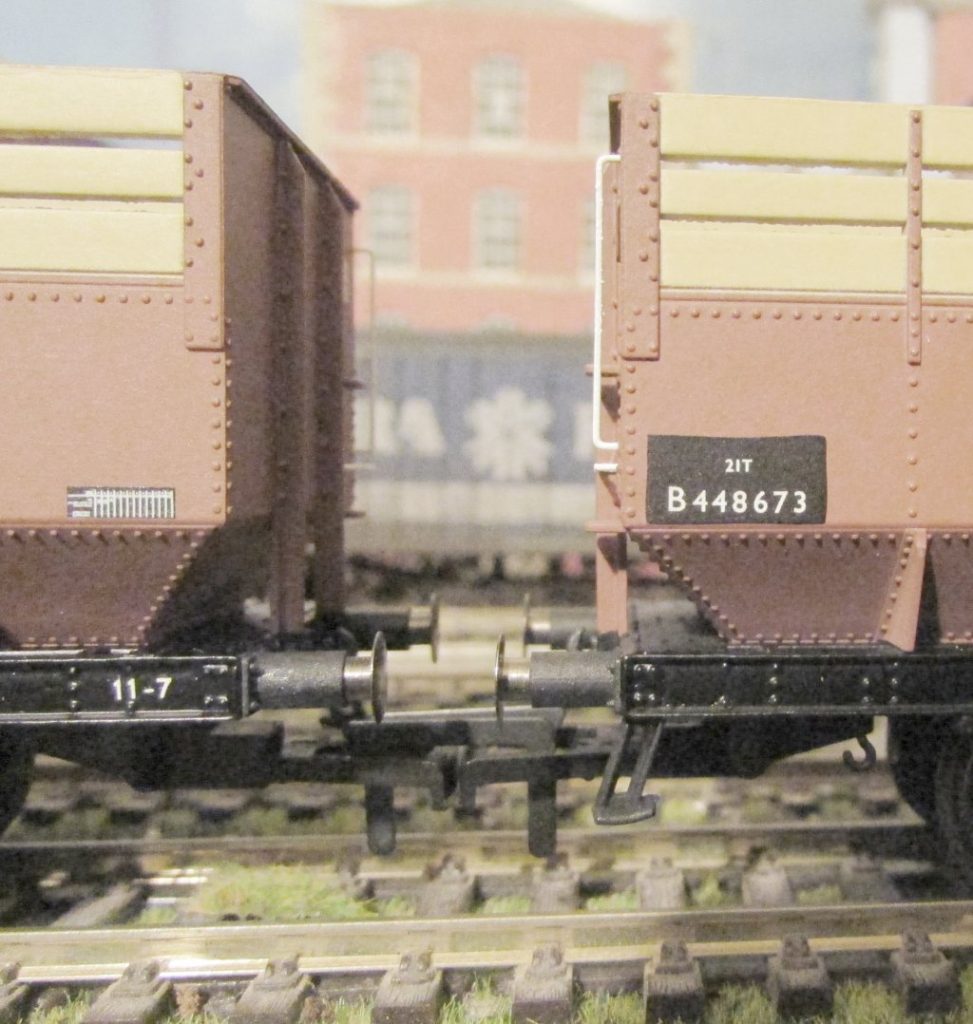 Decoration as per the prototype is sparse. The model is offered in pristine condition. The body is in bauxite with appropriate wagon numbers in white on a black background. At the opposite end
are some tiny markings that viewed under a very powerful magnifying glass reveal themselves to
be a tiny grid. At the end of the body, located to the left of the vertical grab rail are standard
OHLE flash warnings. The under frame is also appropriately marked out with the makers plate
ware can be seen the wagon number.

Well Done Hornby, you’ve pulled it off again. For one reason or another this type of wagon has to
the best of my knowledge not been released. in RTR format, so fills a gap. The modern modeller
is a hard task master demanding higher and higher standards. However I feel this delightful
offering is going to tick many of the boxes. Costing £19.50 from Rails of Sheffield I paid slightly
less than RRP.

Value for money? For me anyway a resounding YES! This is a well made model
with plenty to interest and will bring yet more variety to my freight fleet. If you like building for
relaxation that’s great, but I suspect there would be very few modellers who could produce
anything as detailed as this and most probably would find it difficult to match even the growing
cost of the RTR offering. And now its time to enter service. By the nature of their work they
were filthy so it off to Paul Bartletts wonderful site and out with the poster paints. Watch this
space!!

Within a few months of writing this a TOPS variant did indeed appear and is included in these
pictures.